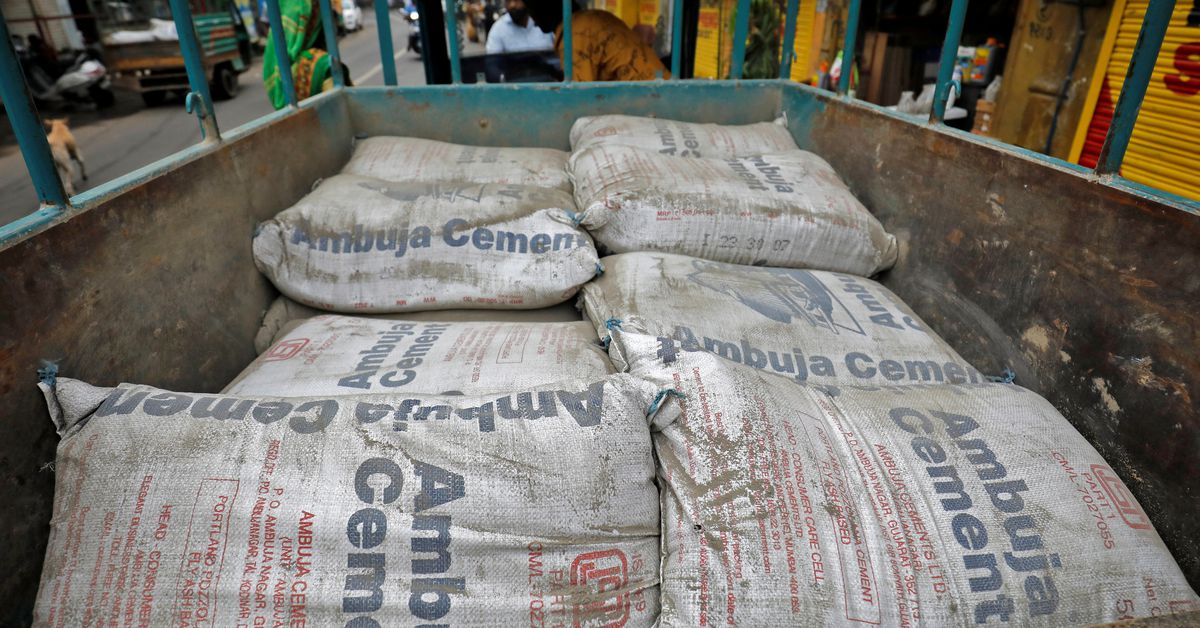 The report said executives of the companies discussed coordinated price hikes in Zoom calls and in-person meetings at company guest houses, with some officials using personal mail to communicate with rivals.

One company official’s WhatsApp message cited in the report said a “forum” of companies had agreed to gradually raise cement prices in some regions by 5-10 rupees (6-12 U.S. cents).

An official at the Pavers and Blocks Manufacturers Association, whose members sell concrete paving blocks, told Reuters price hikes by cement companies in recent years were coordinated, leaving no scope for cutting costs by switching suppliers.

Although cement prices vary across India, CCI’s report showed they moved in the same direction.

A view shows Ambuja Cement bags, to be carried to a construction site, in a load carrier in Ahmedabad, India, July 29, 2022. REUTERS/Amit DaveNEW DELHI, Aug 5 (Reuters) – Swiss giant Holcim’s India units and more than a dozen other cement manufacturers colluded to raise prices and restrict supplies for years, which included regularly inspecting one another to ensure there was no breach of the agreements, according to a federal antitrust probe.The investigations arm of the Competition Commission of India (CCI) has held top leadership – CEOs or Managing Directors – of Holcim units ACC and Ambuja, market leader UltraTech and 17 other firms such as Shree Cement and Dalmia Cement liable for antitrust violations.The investigation report, issued last month and seen by Reuters, is the penultimate but most significant stage of the CCI probe that started in 2019. The report, which is not public, will now be reviewed by CCI’s top three officials who have powers to impose fines and will give companies a last chance to defend themselves.Potentially, the cement giants could be fined millions of dollars. Together, the 20 companies control more than three-quarters of the over 500 million tonne installed cement capacity in India, the world’s second-largest producer after China.The report said executives of the companies discussed coordinated price hikes in Zoom calls and in-person meetings at company guest houses, with some officials using personal mail to communicate with rivals. WhatsApp messaging was also extensively used.One company official’s WhatsApp message cited in the report said a “forum” of companies had agreed to gradually raise cement prices in some regions by 5-10 rupees (6-12 U.S. cents). Senior executives, including from Holcim’s ACC and UltraTech, were assigned as the “coordinator” for various states.

“Price will go up in each week by equal amount,” the message said.

The message did not give details but typically, cement is sold in 50 kg (110 lb) bags to retail consumers, and the cost is between 350-450 rupees ($4-$6) per bag depending on the location and grade of cement.

CCI did not respond to a request for comment.

Holcim (HOLN.S) said in a statement that “the Indian companies are managing this matter responsibly and we expect them to continue to do so accordingly.”ACC (ACC.NS), Ambuja (ABUJ.NS) and UltraTech Cement (ULTC.NS) declined to comment, while Shree Cement (SHCM.NS) and Dalmia Cement did not respond.India’s Adani Group, which entered into a proposed $10.5 billion deal with Holcim in May to acquire its India businesses, also did not respond.

Cement production is a lucrative business in India’s booming economy, with high demand especially from rural housing and infrastructure firms.

An official at the Pavers and Blocks Manufacturers Association, whose members sell concrete paving blocks, told Reuters price hikes by cement companies in recent years were coordinated, leaving no scope for cutting costs by switching suppliers.”We sometimes pass the higher cost to consumers,” said the official, who declined to be named since he does business with the cement companies amounting to 50,000 bags a month and was concerned about reprisals.Overall, the CCI investigation report concluded the cement companies colluded in 13 states in eastern and southern India, with more than 50 industry executives involved in “cartelisation” activities in an “extremely organised manner”.The CCI report said the Cement Manufacturers Association, an industry body, “facilitated and penetrated the anti-competitive conduct in the cartel” by collating and sharing pricing details among companies. The group did not respond to Reuters queries.Cement companies have been accused of price-fixing for over a decade. In 2016, the CCI imposed a $800 million fine on 10 companies for fixing prices, including the Holcim units and UltraTech, but the decision has been challenged since then at the Supreme Court.In the 2016 ruling, the CCI had said the manufacturers association helped companies collude, and ordered it to “disengage and disassociate itself from collecting” prices or production-related details.

Although cement prices vary across India, CCI’s report showed they moved in the same direction.

In Kolkata and Patna in eastern India, for example, cement bag rates fell for several months until January 2021 to reach 300 rupees and 350 rupees, respectively. Then, they rose in tandem over four months to touch 360 rupees in Kolkata and 390 rupees in Patna, before easing again, CCI said.In southern India, UltraTech and many other smaller companies controlled cement output and supplies through informal “kiln closure” agreements in a mutually agreed schedule, the report said.

To ensure compliance with the informal arrangement, a verification system was designed, the report said. Investigators found a sheet listing company names and their plant locations, and assigning a rival firm to visit and verify production halts, it said.The sheet noted that the visiting “guest” company’s team should be provided with a four-wheeled vehicle and a driver during inspections, which must be held at least twice a week.The “host” company – the one being inspected – should “provide in person access to all guests to all kiln platforms”, the sheet stated.”The evidence reaffirms the fact that an elaborate mechanism was developed by the cartel to verify and report ‘kiln’ running/closure…as per the understanding reached,” the CCI report said.The CCI report said cement executives decided on price increase plans down to the district level of each state, splitting companies into categories like “Group A” for large firms, and recommending lower prices for “Group B” smaller peers.The report contained a price chart which it said was shared in January 2020 by Holcim unit ACC’s Shailesh Ambastha, a sales and marketing director. It detailed current and target “Group B” prices for 42 districts in the eastern state of Bihar.The report said “charts having agreed state-wise prices were circulated by Ambastha to competitors and meetings were held to guide the officials in its implementation.”CCI said Ambastha wrote in one message: “Try to be 10 plus from your current level. This is what all are attempting”.

Presented with evidence, the CCI report said Ambastha “submitted evasive replies” by saying he did not recall the communication. Ambastha did not respond to requests for comment from Reuters.Some executives like Anil Kaushik, a joint vice president for marketing at Shree Cement “confessed”, according to the report, admitting during questioning to sharing pricing data with a rival for “mutual benefit.” Kaushik declined to comment to Reuters.But the report said he told investigators: “In the cement sector, no company can increase the prices in isolation and survive.”Reporting by Aditya Kalra in New Delhi; Editing by Raju Gopalakrishnan